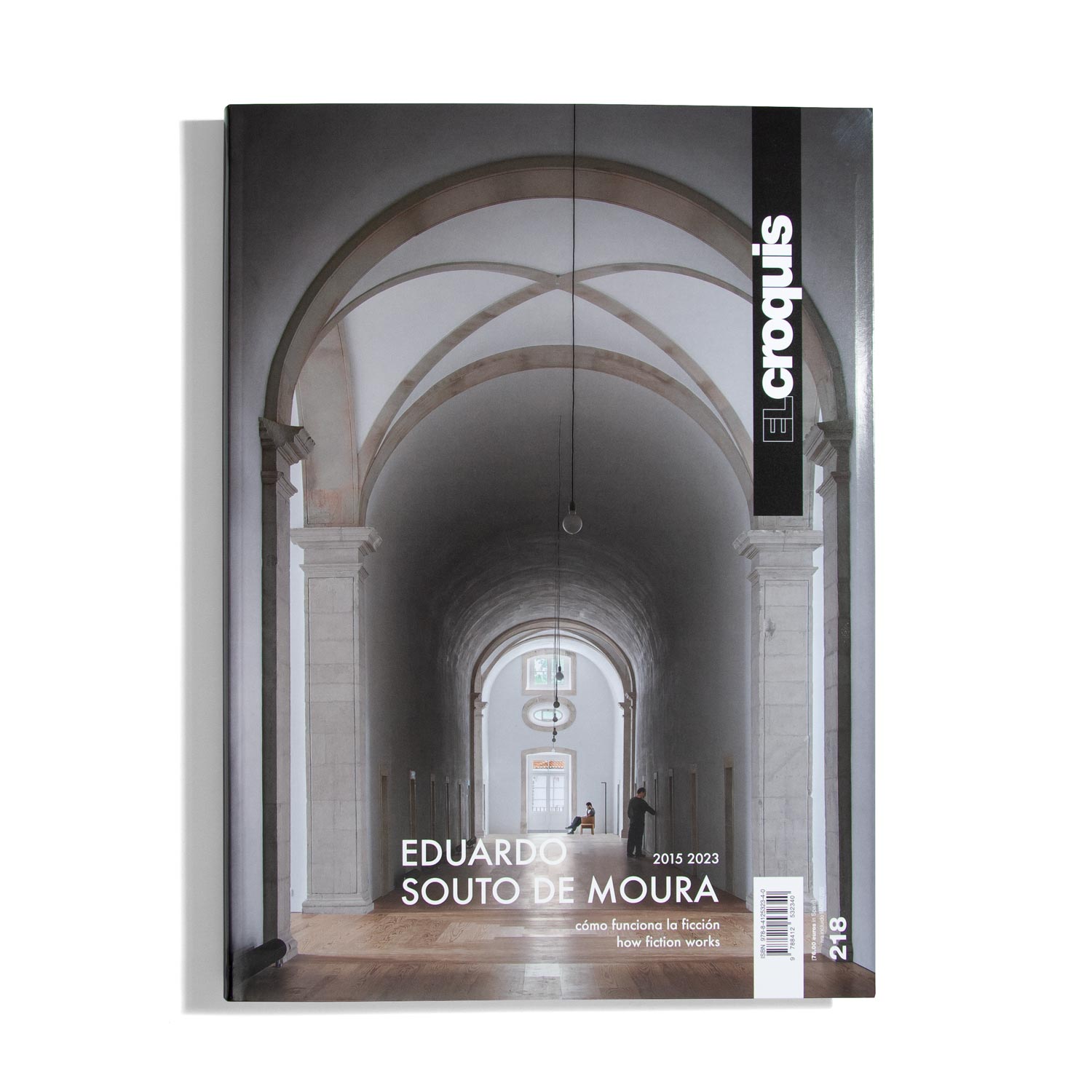 Posted at 10:36h
0 Likes
Eduardo Souto de Moura was born in Porto, Portugal, in 1952. In 1970 he began his studies in Architecture at the School of Fine Arts in Porto. Throughout his academic studies he collaborates with architects Noé Denis, Álvaro Siza and Fernandes de Sá. After graduating in 1980, he opened his own office. Among numerous other national and international awards, Eduardo Souto de Moura has received the Pessoa Prize in 1998, the FAD Prize in 2005, the Ibero-American Prize for Architecture and Urbanism in 2006, the Pritzker Prize in 2011 or the 'Leone d'Oro' Prize at The Venice Biennale in 2018. He is also an honorary member of the American Institute of Architects, an international member of the Royal Institute of British Architects and since 2022 a member of the French Academy of Architecture.
Read More 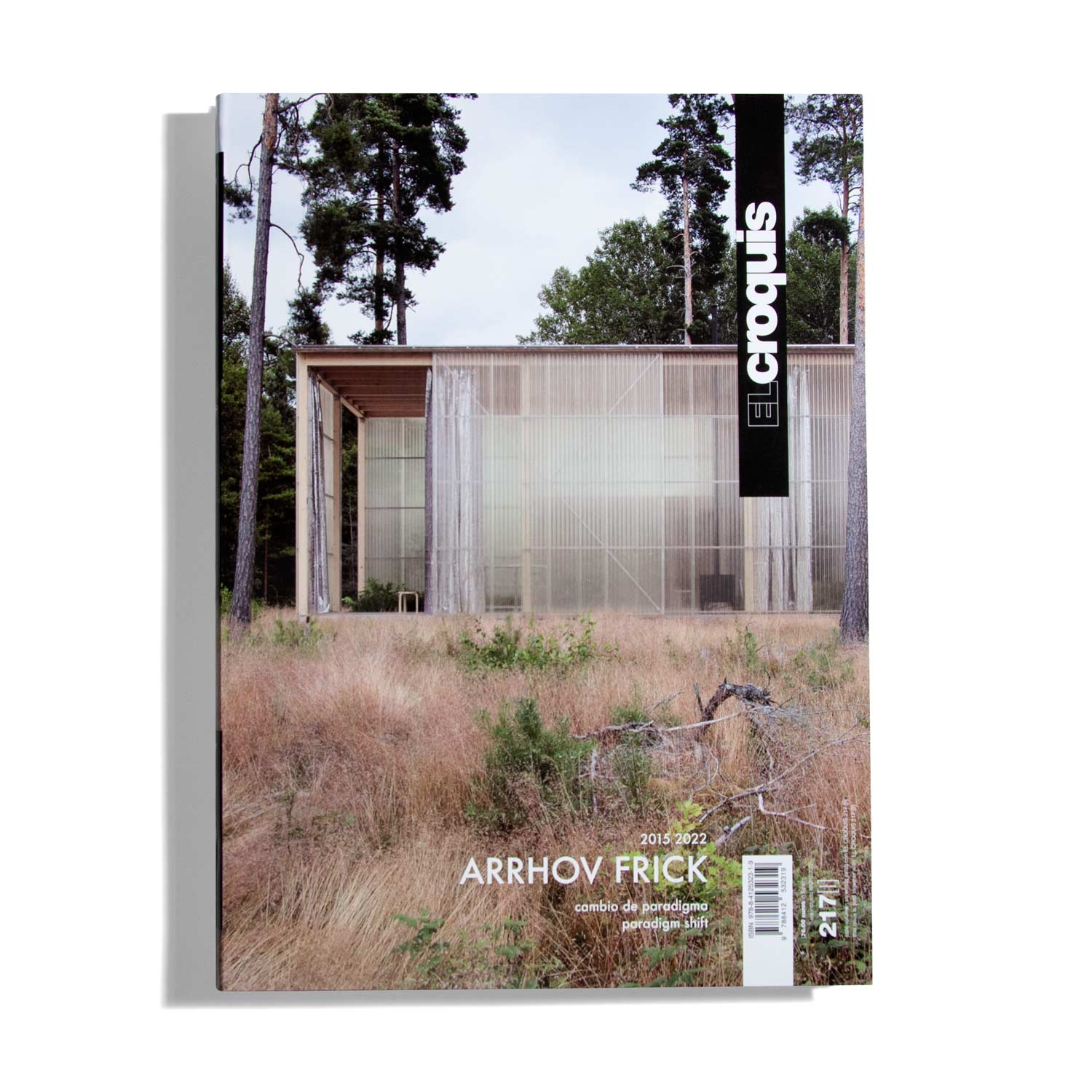 Posted at 18:17h
0 Likes
This instalment of ‘El Croquis’ is made up of two volumes featuring special selections of outstanding works and projects from two architecture offices. In the first volume are the works by Swedish architects Johan Arrhov and Henrik Frick of Arrhov Frick between 2015–2022. Also included is 'How simple Can We Build,’ a conversation led by Ilka and Andreas Ruby, as well as an essay by Professor Philip Ursprung. The second volume showcases the works and awards of London-based architectural practice Groupwork between 2012–2022. Amin Taha, director of Groupwork is interviewed by Cristina Díaz Moreno and Efrén García Grinda in 'Tectonics and History.’
Read More 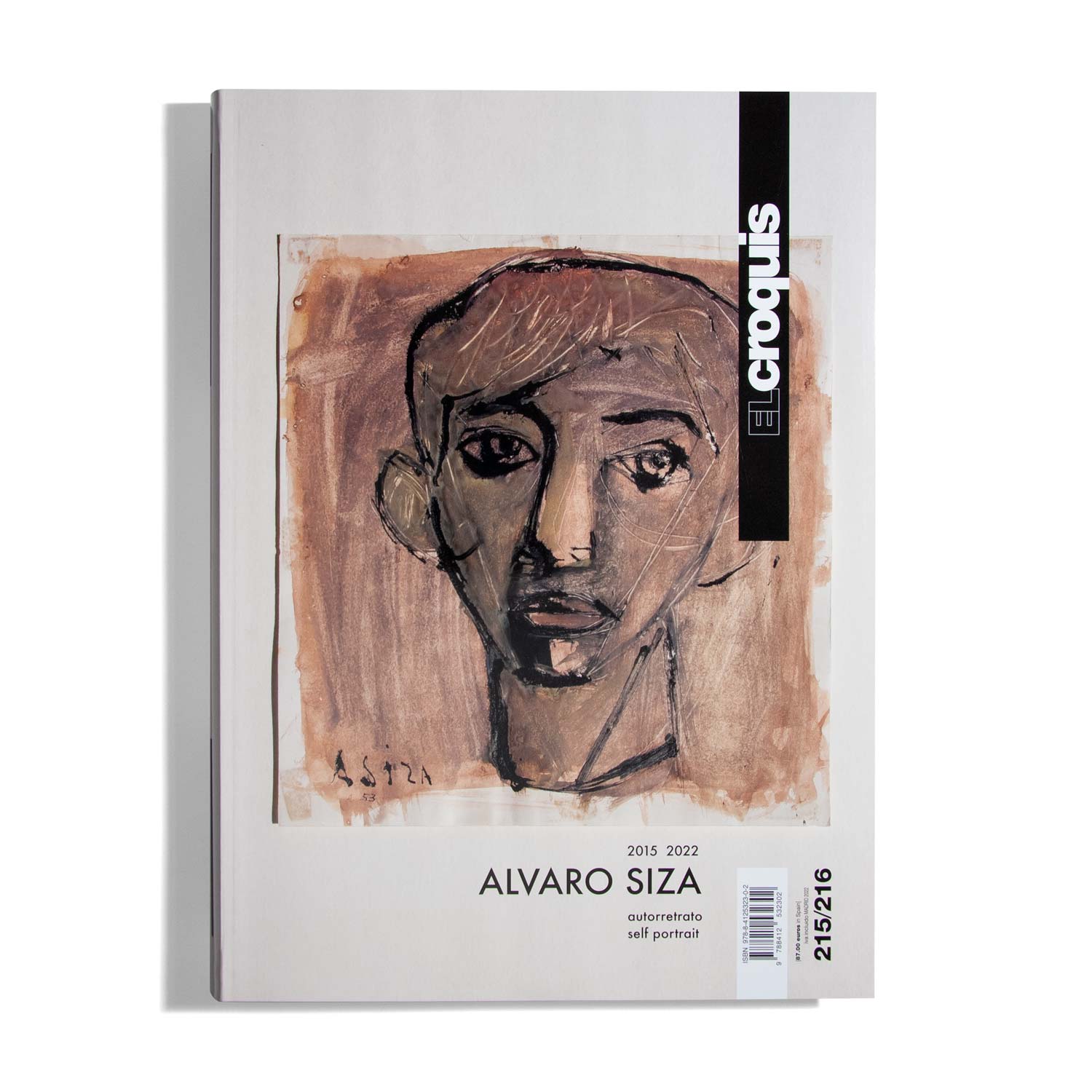 Posted at 09:05h
0 Likes
The magazine profiles Alvaro Siza’s recent work in this special edition. Featuring projects since 2015, it underlines why the Portuguese architect remains one of the most respected designers today. A variety of typologies and scales are covered, from extremely compact works such as the Clay Pavilion for teaching local earthenware techniques in Oaxaca (Mexico), a chapel in Miljana (Croatia) as part of a farmhouse restoration project, and an observation tower with lookout post in the Portuguese mountains, to prominent works like the Huamao Museum of Art Education (China) and the Gramaxo Foundation Headquarters in Maia (Portugal), and many more.
Read More 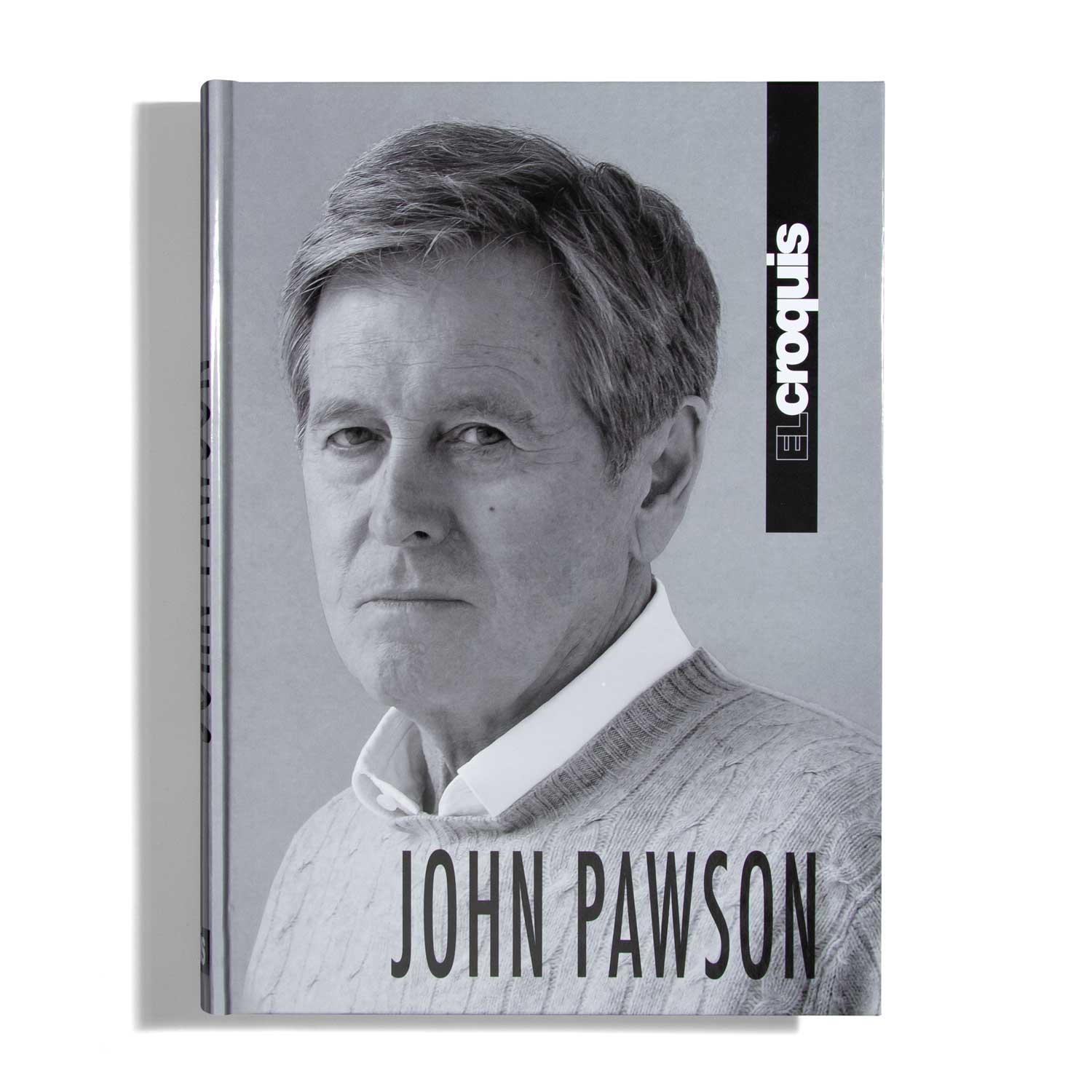 Posted at 10:24h
0 Likes
John Pawson was born in 1949 in Halifax, Yorkshire. Following school and a period of employment in the family textile business he left for Japan, spending several years teaching English at the business university of Nagoya. Towards the end of his time there he moved to Tokyo, where he frequented the studio of Japanese architect and designer Shiro Kuramata. Never a formal apprentice, the experience nonetheless proved pivotal. Following his return to England, he enrolled at the Architecture Association in London, leaving to establish his own practice in 1981. In 2019 Pawson was awarded a CBE for services to design and architecture. From the outset the work focused on exploring fundamental problems of space, proportion, light and materials, rather than on developing a set of stylistic mannerisms, beginning with renovation of the London apartment he shared with the art dealer Hester van Royen. Domestic commissions followed for the writer Bruce Chatwin, opera director Pierre Audi and art collector Doris Lockhart Saatchi, executed in parallel with a number of early art spaces, including Waddington Galleries in London and the PPOW Gallery in New York. Whilst private houses have remained a consistent strand of the work, projects over the past two decades have spanned an increasingly wide range of scales and building typologies, from a walkway across the lake at Kew’s Royal Botanic Gardens on the outskirts of London, to the interiors of two yachts, sets for new ballets at London’s Royal Opera House and the Opéra Bastille in Paris, and remodelling of the former Commonwealth Institute in London, which opened as a new permanent home for the Design Museum in 2016. Pawson’s substantial portfolio of sacred commissions includes the design of a new Cistercian monastery in rural Bohemia, interior renovation of the basilica of the Benedictine Archabbey of Pannonhalma in Hungary and the St Moritz church in Bavaria and the design of a small wooden chapel on the edge of a forest in Germany.
Read More 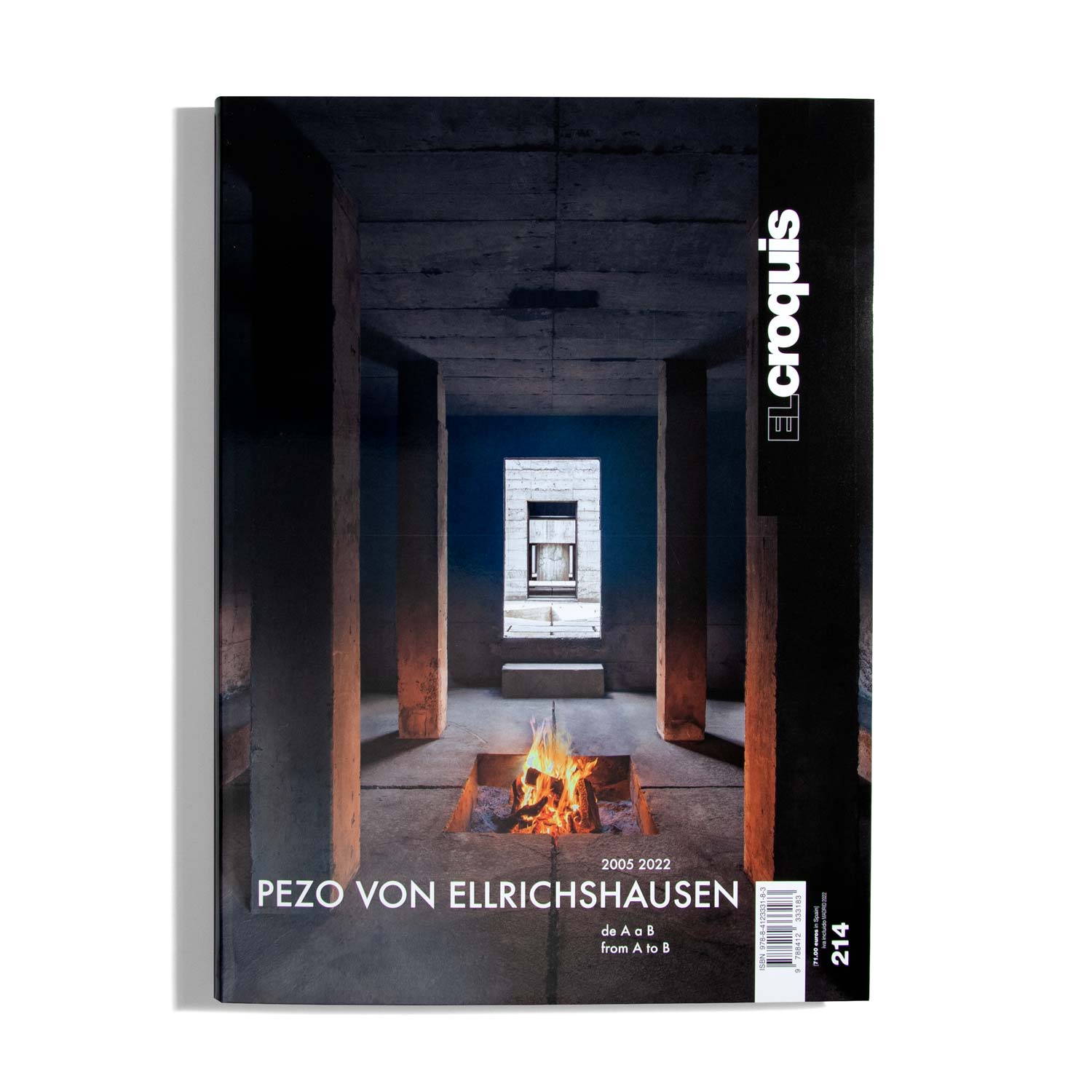 Posted at 15:06h
0 Likes
Pezo von Ellrichshausen is an art and architecture studio founded in 2002 by Mauricio Pezo (b. Renaico, Chile, 1973) and Sofia von Ellrichshausen (b. Bariloche, Argentina, 1976). They live and work in southern Chile, in a farm at the foot of the Andes Mountains. The team shares the Professor of the Practice chair at AAP Cornell University in New York. They have also been Visiting Professors at the GSD Harvard University, the Illinois Institute of Technology in Chicago, the University of Texas in Austin, the Porto Academy and the Universidad Catolica de Chile. Their work has been exhibited at the Royal Academy of Arts in London, the MAXXI in Rome and is part of the Permanent Collection at the Art Institute of Chicago, the Carnegie Museum and the Museum of Modern Art in New York. They have been invited to the Venice Biennale International Architecture Exhibition (2010, 2016), where they were also the curators for the Chilean Pavilion in 2008. They have lectured at the MIT, Princeton University, Columbia University, the Metropolitan Museum of Art, the Architecture League of New York, the Tate Modern, the Victoria & Albert Museum, the Alvar Aalto Symposium and the Royal Institute of British Architects, among other venues, The work of the studio has been distinguished with the Mies Crown Hall Americas Emerge Prize by the IIT (Chicago, 2014), the Rice Design Alliance Prize (Houston, 2012), the 5th Iberoamerican Architecture Biennial Award (Montevideo, 2006), the Chilean Architecture Biennial Award (Santiago, 2006) and the Regional Architecture Prize (Concepción, 2014). Their work has been widely published in monographic issues of ARQ (Santiago, 2007), 2G (Barcelona, 2012), A+U (Tokio, 2013) and AV (Madrid, 2017), and in the books Spatial Structure (B Architecture publisher) and Naïve Intention (Actar).
Read More 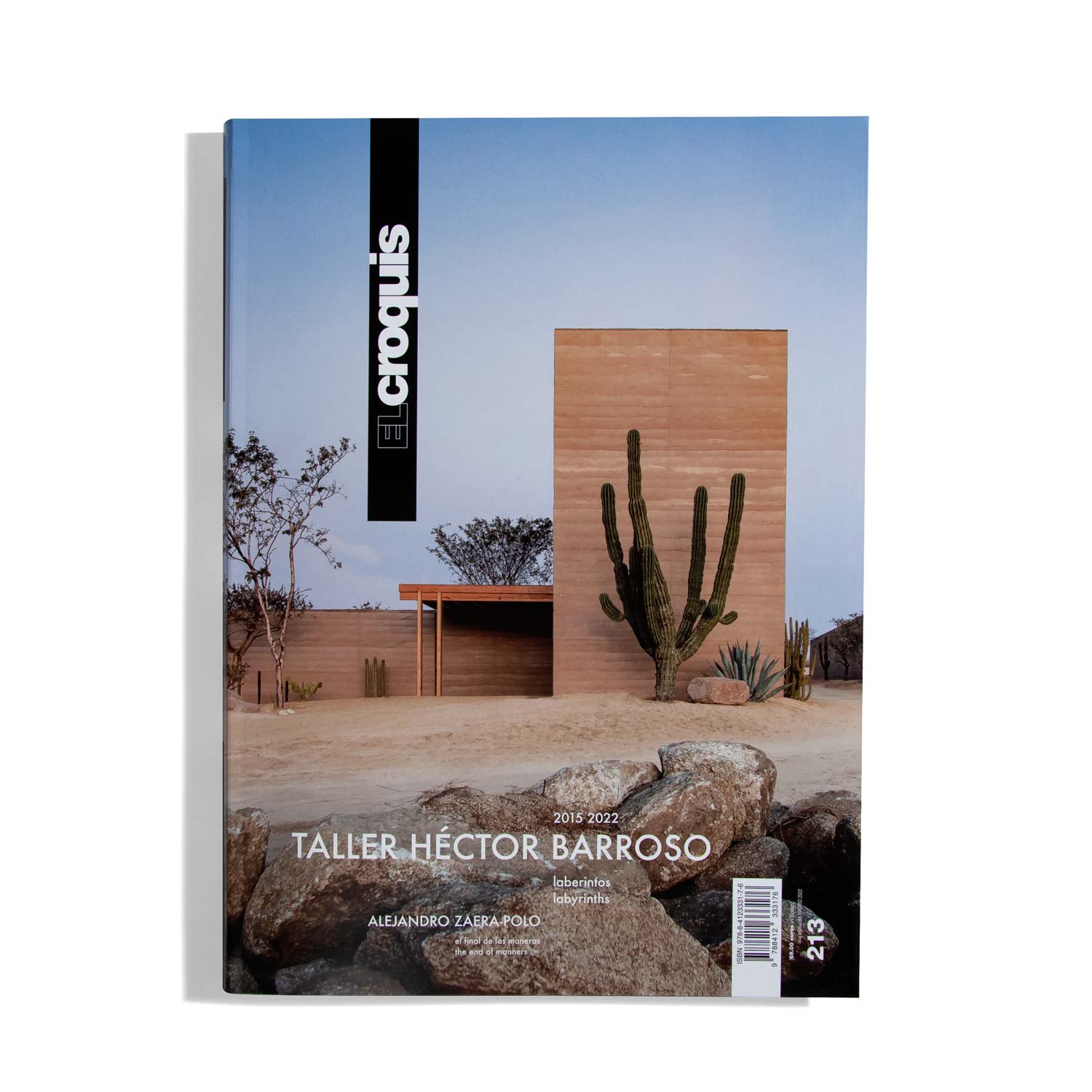 Posted at 15:29h
0 Likes
Based in Mexico City, Taller Héctor Barroso primarily focuses on residential architecture. This issue features recent work since 2015, including profiles of thirteen projects that range from standalone dwellings and groups of houses to apartment buildings and a sports complex. To supplement the selected projects, Hugo Sánchez converses with Héctor Barroso about the creative process. The issue also includes an in-depth analysis of the practice’s architecture written by Spanish architect and critic Jesús Vassallo.
Read More 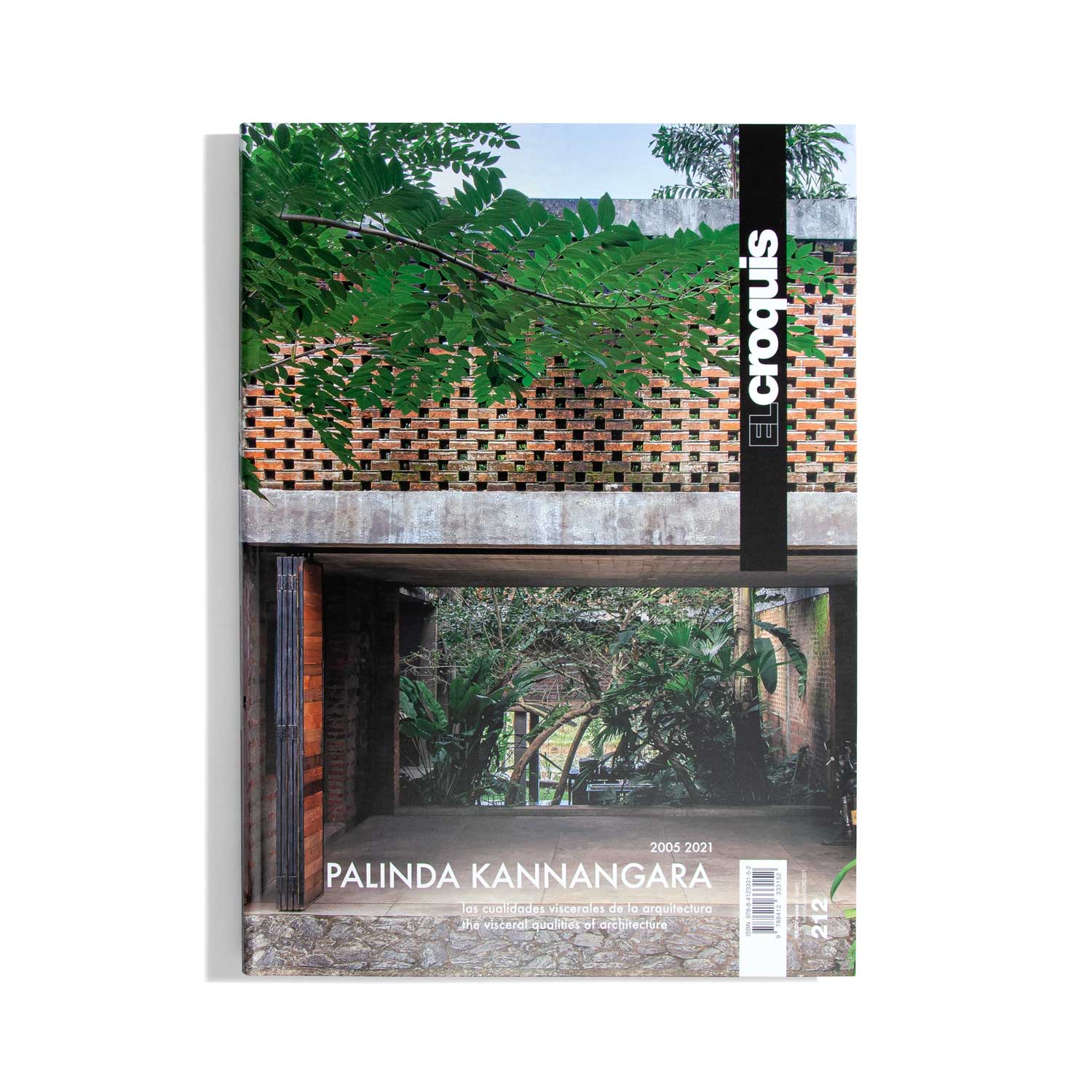 Posted at 13:22h
0 Likes
The award-winning Sri Lankan architectural firm led by Palinda Kannangara is known for an experiential architecture that hinges on simplicity and connection with the natural environment. Its work has been recognised for a personalised approach, contextual sensitivity, experimental material use, and a minimalism reflective of the Sri Lankan ethos. Started in 2005, Kannangara’s practice often works on small-scale projects which connect with the region, climate, and landscape using locally available materials and technology. This issue features twelve works, including several houses, a wellness retreat, holiday bungalows, an artist’s retreat, and staff quarters for a wind power plant.
Read More 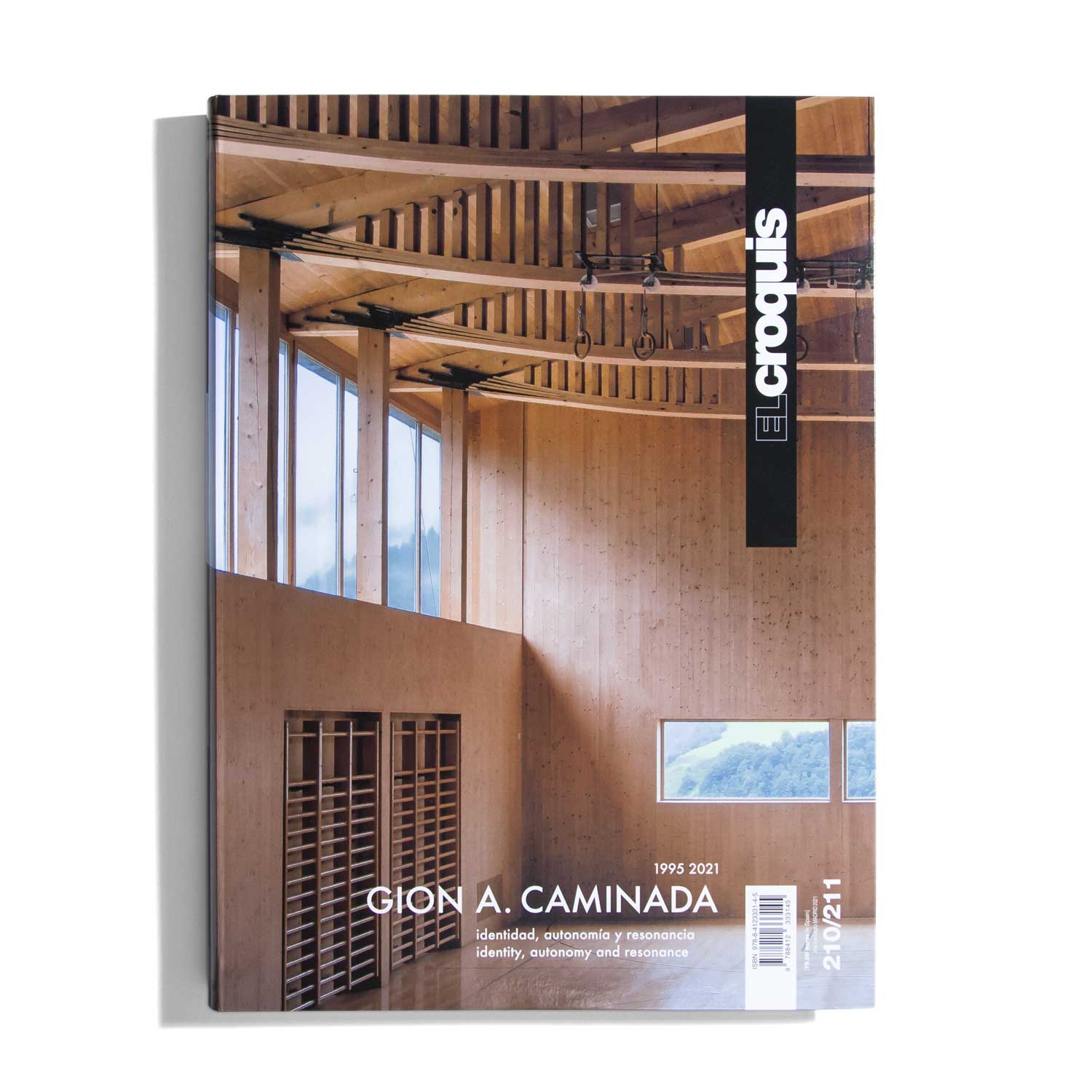 Posted at 01:55h
0 Likes
A special double issue devoted to the world of Gion A. Caminada, known for his minimalist style that mixes modern design with traditional Swiss methods and materials, especially using wood. Featuring seventeen projects spanning the past three decades, the magazine [expand title="more"] offers a comprehensive overview of Caminada’s body of work, including notable projects such as the Stiva da Morts community mourning place in Vrin, the Ballenberg Open-Air Museum, the Girls’ Boarding School at Disentis Abbey, and a forest hut in Domat – a communal and educational space for the local community and schools. An interview and personal reflection by Caminada himself complete the tribute. [/expand]
Read More 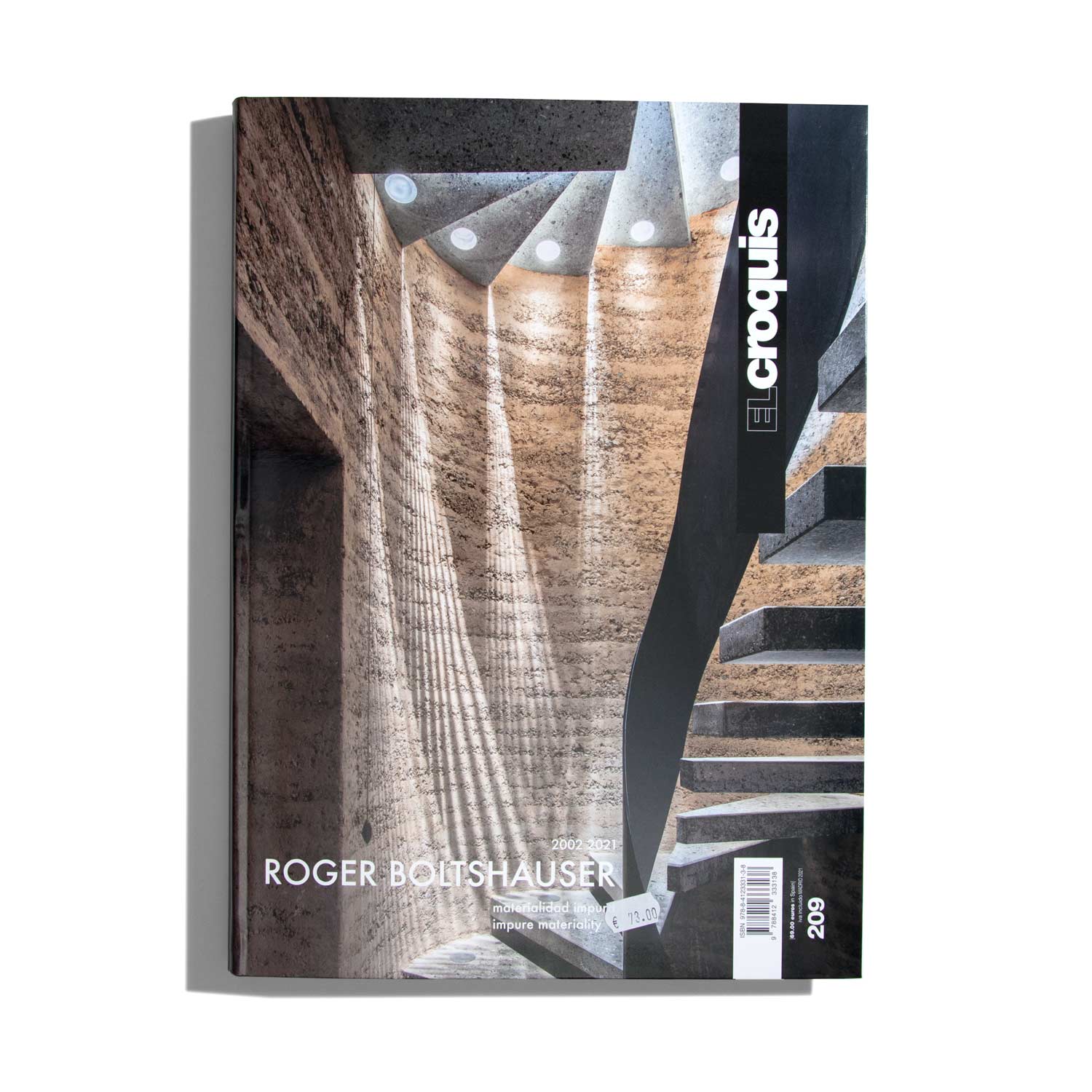 Posted at 11:45h
0 Likes
Covering almost two decades of work by Roger Boltshauser, this issue takes a fresh look at the Zurich-based architect’s uniquely contemporary manner of expression. With profiles of more than 20 projects conceived since the turn of the century, [expand title="more"]it outlines Boltshauser’s approach to materials and the methods he uses to reveal their intrinsic constructive and structural possibilities. Among the highlights are the rammed earth Rauch House, a clay observation tower at the Brickworks Museum in Cham, Oerlikon Sports and Swimming Centre, Ozeanium at Basel Zoo, and more. The issue also features a conversation with the architect and Jonathan Sergison, plus an essay by Jesús Vassallo.[/expand]
Read More 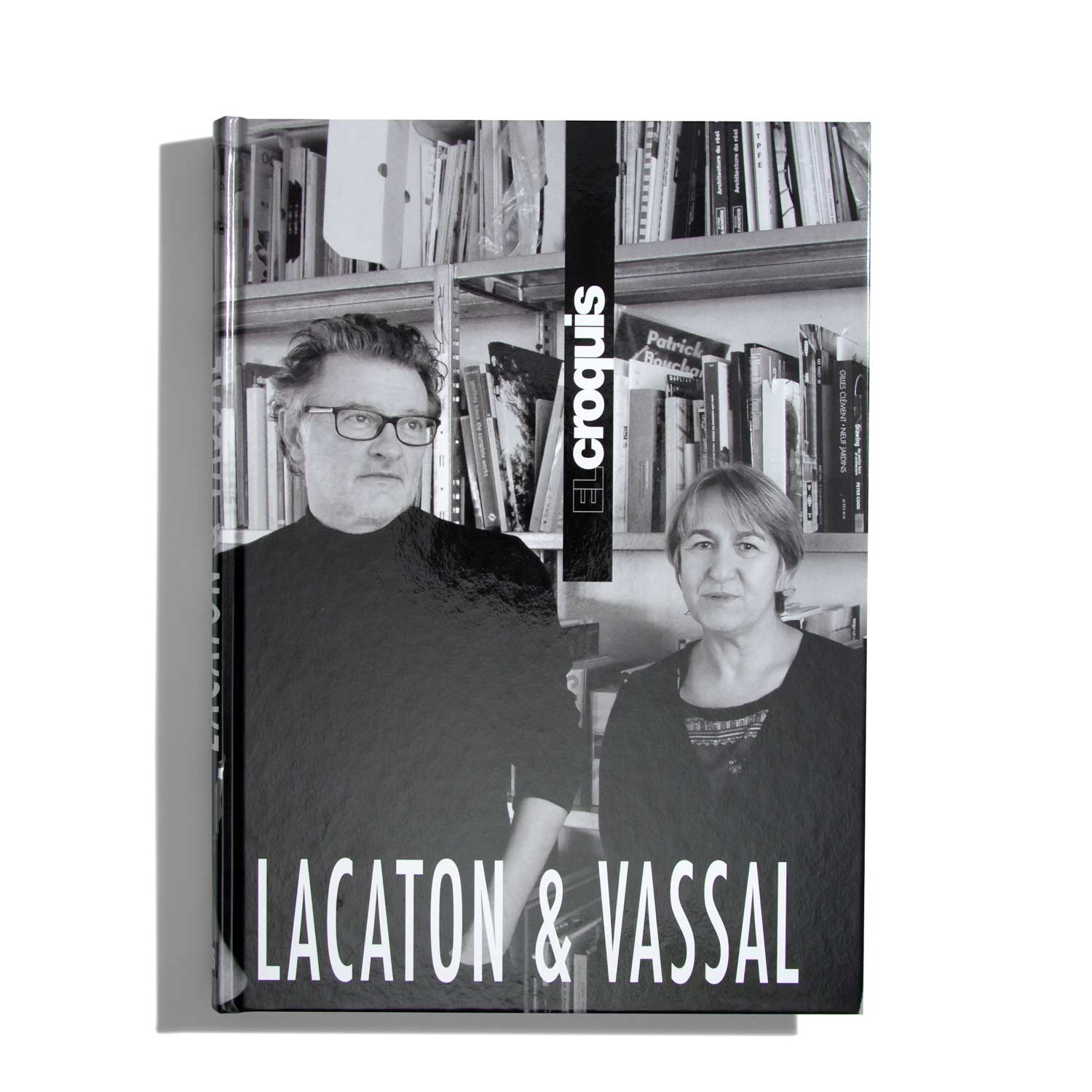 Posted at 11:45h
0 Likes
This reprint of ‘El Croquis’ celebrates Paris-based architects Lacaton & Vassal, after founders Anne Lacaton and Jean-Philippe Vassal became Pritzker Architecture Prize Laureates in 2021. [expand title="more"]It gives special consideration not only to the evolution of their methodology and ideals, through critical analysis by Arnoldo Rivkin and Juan Hereros and an interview with the architects, but also to an extensive selection of exemplary projects. Among the featured works are the Nantes School of Architecture, FRAC Nord-Pas de Calais, Guangzhou Museum, Le Grand Sud Polyvalent Theater in Lille, housing projects in Paris, Saint Nazaire, Mulhouse, and Bordeaux, plus their newest projects since winning the Pritzker Prize.[/expand]
Read More